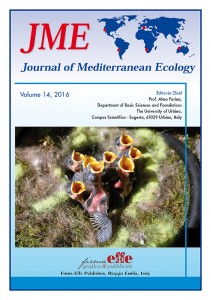 The present study was conducted to evaluate and characterize the environmental conditions required for the cultivation and production of duckweed (Lemna gibba L.) growing in natural drainage water system, and cultivated in a polyethylene mesocosm pond for the determination of its potential as aquatic fodder rich in protein for both fishes and livestock. Ten plants and water samples were collected from ten sites of a natural drainage water system and analyzed for their physico- chemical characteristics and nutrients contents. The collected fresh frond colonies of duckweed were washed carefully and cultivated in two polyethylene mesocosms (2×4×0.4 m). One of them was filled with drainage water (0.3 m deep) and the other filled with underground water enriched by NPK source for one year.The optimum water depth was (30 cm) with transparency (20 cm), while the ideal pH for the best growth ranged between (6.5-8) and the optimum water temperature ranged between (25-35oC). The optimum electrical conductivity ranged between 4000-14800 mmhos/cm, the dissolved oxygen ranged from 1 to 4 mg/l and the biological oxygen demand ranged from 11 to 33mg/l. The ideal mean PO4 and NH4 were 10-12mg/l respectively. The mean concentration of Ca, K, Mg, Na and HCO3 were 50, 120, 36, 220 and 135 mg/l. The mean ash contents was 16, 16.4 and 17% for the three samples type, and the mean total fat contents were 10, 8.5 and 7.5% respectively, while the mean total fresh weight production was 290, 325 and 353ton/hectare/year in the natural conditions, cultivated on drainage water and cultivated on underground water respectively, that gave mean total dry weight 29, 31.5 and 32 ton/hectare/year. The results of analysis of the dry matter showed that the mean % of crude protein contents at the duckweed were 40, 41 and 44% for plants collected in nature, cultivated on drainage water and cultivated on underground water respectively. The mean protein concentration was higher in the cultivated plant than in the natural condition where it was 44%. On the other hand, the mean carbohydrates content was 12, 13 and 12% plants collected in nature, cultivated on drainage water and cultivated on underground water respectively, while the mean crude fiber content was lower in the cultivated plant on the underground water (7%) and higher in the natural growing plants (10%). The ability of duckweed to propagate rapidly by consuming nutrients makes it an excellent candidate for nutrients uptake from water and a good source of protein rich biomass suitable for feeding a wide range of animals including fishes.

Ecoacoustic events are functional units of the acoustic environment. Their classification offers a substantial contribution to interpreting ecological complexity. A procedure for their detection and identification, Ecoacoustic Event Detection and Identification (EEDI), is proposed and discussed. Dedicated software (SoundscapeMeter 2.0) is illustrated in a detailed manual. EEDI operates according to two steps: in a first step, a numerical analysis based on the ACI metrics, ACIft and its evenness ACIfte, detects potential events inside an event space. In a second step, the detected events are identified using the acoustic signature (ACItf) of events previously empirically identified.The EEDI procedure can be extensively used in basic and applied research. In particular, EEDI can be used in long-term monitoring programs to assess the effect of climate change on the dynamics of individual species and on the associated acoustic communities. The EEDI model can also be used to investigate the acoustic intrusion of humans in natural systems and in urban areas.

An inventory has been made of endemic aquatic macroinvertebrates in streams of the Canary Islands. The inventory shows that of 31 pristine endemic species, 10 are now extinct. From the remaining 21 species, only 12 occur in streams with undisturbed hydromorphology and natural background conditions, and among these, there are 6 species that only occur in a single body of water on a single island, so they are very near to extinction. The main reason for this development is the dramatic decrease in the number of streams on the Canary Islands due to unsustainable consumption of water for agriculture and tourism and the transformation of most of the remaining streams to canals. However, natural reaches of streams with an endemic macroinvertebrate fauna still exist in specially protected areas of Tenerife, La Gomera, and La Palma. These reaches serve as reference status for the development of a specific assessment method for streams on the islands. This method takes into account common parameters such as water quality and hydromorphology, though to biodiversity and island-specific endemism is given greater emphasis. These last two concepts of stream development could be important tools in both nature conservation and protection of the remaining endemic and sensitive species.

Duckweed (Lemna gibba L.) has been evaluated as low-cost biosorbent for removal of phenol ions from aqueous solution. Effects of operational parameters such as pH of solution, biosorbent dosage, initial concentration of phenol and contact time were investigated under batch mode experiment. The obtained results showed that the optimum adsorption for the removal of phenol from aqueous solution using duckweed were 250 mg of Lemna gibba for 10 ml of phenol concentration at pH 6.0 after 18 min of adsorption.

The end of the run? New evidence of the complete colonization of the Mediterranean Sea by the Atlantic invader crab Percnon gibbesi (Crustacea: Decapoda: Percnidae)

After the finding of several specimens of Percnon gibbesi in Elba Island (Tuscan Archipelago), a preliminary census of the populations inhabiting the island coasts was run. Elba Island coasts were investigated by means of underwater linear transects to estimate the crab population density and distribution. The non-native crab population is found in the south and west coast with high density in the southern part of the Island. Crabs share the same habitat of other herbivorous species, such as the crustaceans Pachygrapsus marmoratus or Palaemon elegans, and the Paracentrotus lividus or Arbacia lixula sea urchins, but no interactions were observed