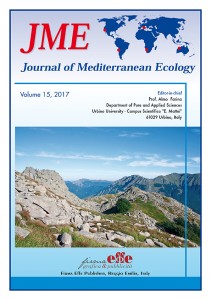 In the present work we provide preliminary genetic evidences of several phyletic lineages of Capitella capitata  (Fabricius 1780) in the Mediterranean Region. A portion of taxonomic informative nucleotide sequence (COI) was investigated in C. capitata  samples from five different sites along the Italian coasts. Sequences analysis carried out with both Kimura genetic distances and Bayesian method support the existence of five clusters. According to the 10 times fold method, widely applied for DNA Barcoding, the 5 clusters identified can be considered different provisional species, one for each sampling site. Given the importance of C. capitata  as indicator organism for polluted marine environments, and considering that different species or lineages may show different tolerance to pollutants, a deeper knowledge on the number and distribution of existing C. capitata  species should be pursued.

A survey of thrips (Thysanoptera) and their host plants was conducted between April 2006 and April 2009 on the campus of INRA Sophia Antipolis in Southern France. It was focused on 1,850 samples in which 11,617 thrips were identified on 108 plant species from 98 genera and 42 families. The majority of thrips collected belonged to the sub-order Terebrantia and to the Thripidae family. Two other families, Aeolothripidae and Melanthripidae, amounted to 9% of the total. The six most common thrips species were found on more than 30 plant species. Thrips tabaci Lindeman was found on 99 different plant species and was the most abundant species in summer (38%). It disappeared as soon as the temperatures dropped in autumn. It was replaced in winter by T. major Uzel (14% of thrips collected). Frankliniella occidentalis Pergande, the spe- cies that prevails in the region’s greenhouses (only 3.2% of thrips collected), was present only with very few individuals in the vegetation outside the adjacent greenhouses. About 54% of the infested plants were herbaceous annuals or biannuals, whereas 46% were woody perennial plants. Few thrips species occurred only on one plant species. The big majority occurred on several plant species simultaneously, or on different plant species in the annual course. Our study shows that Thysanoptera species occur on a wide range of host plants without causing overinfestations in the natural vegetation. However, protected crops in neighbouring greenhouses are easily infested by some of the thrips from the adjacent vegetation.

This paper presents an integrated and a trans-disciplinary analysis from a case study in Northwest of Tunisia in order to re- lease a decision for upscaling sustainable land management practices in the national level. The integrated, trans-disciplinary approach aims at initiating a process of co-production of knowledge and joint learning between relevant stakeholders from the local to the (sub-) national level. Thus, a range of different stakeholders – from land users, civil society organisations, and local authorities to industry and government representatives – must actively be engaged in this process. This study is conducted using a range of workshops, which are a cornerstone of stakeholder participation and aim at enabling transdisciplinary-learning processes, between scientific and non-scientific actors. Thus, the workshops provide opportunities to initiate, promote and deepen a mutual learning process between the researchers and a range of relevant stakeholders (e.g. land managers, food producers, developers, industry, regulators, advisory services, authorities, experts) that have some kind of interest in the topic of land threats in the case study site. Each of the stakeholders – from science, practice or policymaking – has his/her own perspective and contribute to process of knowledge; exchange and learning with his/her own expertise and experience. Given that, the knowledge contributed by scientific and non-scientific actors is valued equally in this process, and that local and scientific knowledge is integrated to some extent, which seems, that more suitable sustainable solutions can be identified and implemented concerning the prevailing land threats in the case studies. This approach was successfully efficient to engage appropriate stakeholders in a dialogue by sharing their knowledge and experience concerning the land degradation threats, and by contributing to a joint reflection, decision-making and evaluation process about mitigation and remediation practices. Results of this study were used in favor of an international project called Decision Support for Mainstreaming and Scaling out of Sustainable Land Management (DS-SLM), which aims to mainstream sustainable land management best practices into national and/or sub-national agricultural and environmental plans and investment frameworks, policies and programs to ad- dress combating desertification, land degradation and drought (DLDD) in 15 countries, which Tunisia is a member.